“a colorful tale of love, loss, greed, and murder.”
—Publishers Weekly
“Local interest and well-written dialogue keep the pages turning.”
—Booklist
“Stein layers the lies and swirls the secrets.... Great stuff!”
—Catriona McPherson
“my favorite brew of mystery ingredients”
—Naomi Hirahara
“Scratch the surface of Brooklyn and you find the past...compelling story.”
—Sheila Connolly
“...she evokes the past so that it becomes just as important as the present...”
—Sarah R. Shabe

Each Brooklyn neighborhood has its own history, its own social norms, its own secrets. And its own crimes. Even as change comes roaring in, the past is never completely silent... 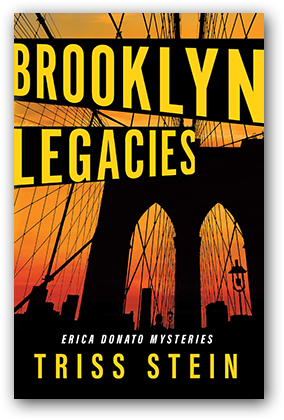 Murder strikes the neighborhoods of Brooklyn—the hip, the historic, and the hood

The search for a lost portrait of Brooklyn's own genius Walt Whitman sends urban historian Dr. Erica Donato into Brooklyn Heights, a neighborhood of quaint and charming streets, family names out of history, and spectacular views of the harbor and the world-famous bridge. New York's first suburb has long weathered political battles about neighborhood preservation and destruction. Is a new one shaping up?

Erica meets an idol, fiery community activist Louisa Gibbs, now locked in a dispute with the Watch Tower Society. One of Brooklyn's biggest landowners, the Jehovah's Witnesses are selling off their holdings. Then at a glittering party, Erica meets the threatening Prinzig clan who are trying to buy the Witness's property adjoining Louisa's historic home.